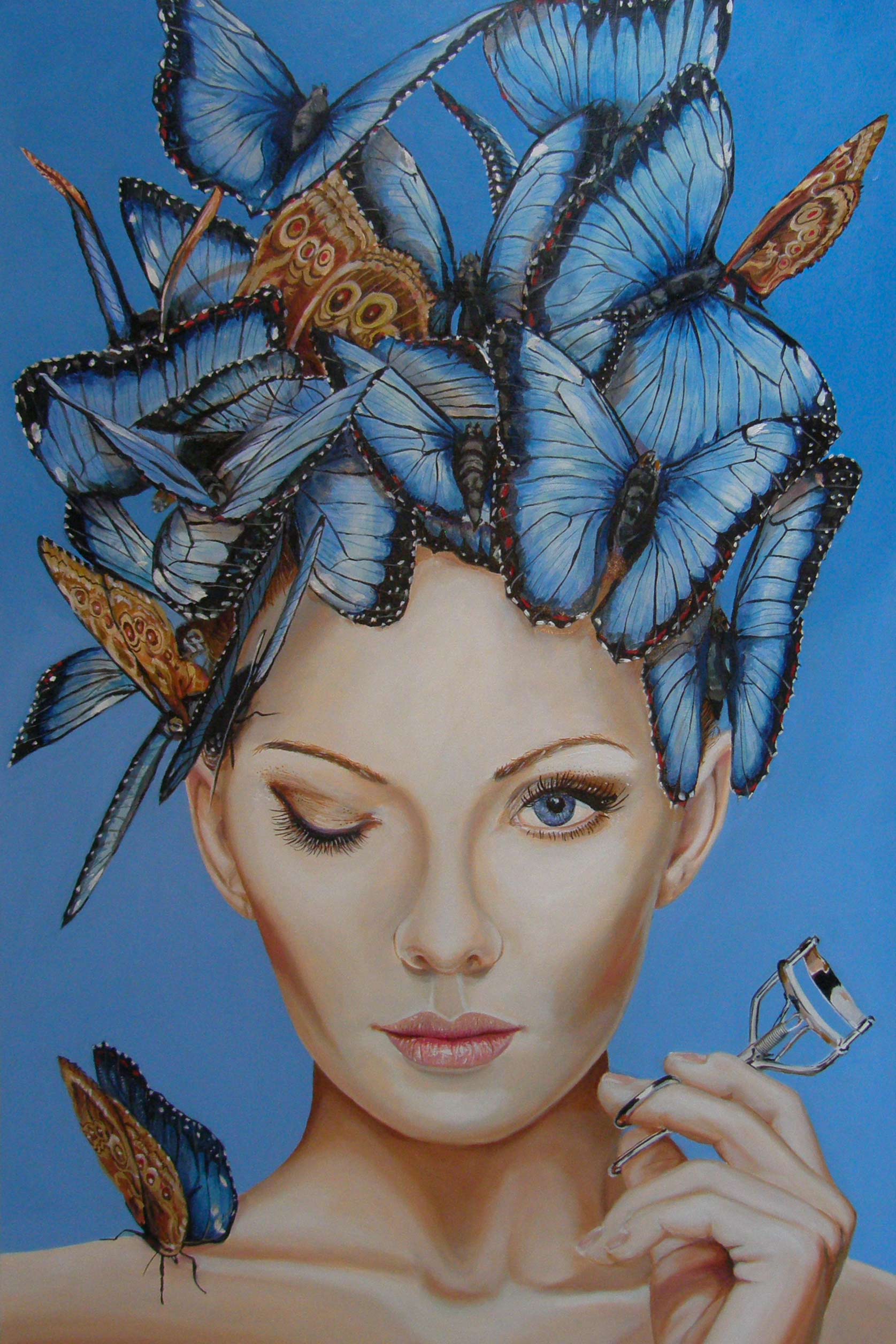 1D is a painting which belongs to the series Chroma in which a certain colour is used to express an emotional state. If we were to give it another title, it could be ‘electrifying crush’ or something along the lines of ‘having butterflies‘ or ‘externalisation of love’, though that would sound a tad dry. But this is where words fail, and images triumph in their own incompatible language.

There is a very piercing clear blue at play here, and it is called Cerulian, which has ended up being used in several of my paintings…and nearly always glazed up in several layers to give it extra vibrancy. Now, I use butterflies in several contexts. Well practically as semiotic symbols used to point literally at nature and the delicacy of it. In Vanitas (live before you die sort of thing) or fleeting moments, the ephemeral. However in this painting, I used them as an externalisation of feelings. The young woman is in love and has butterflies in her stomach.

Since medieval times, popular culture has mentioned the heart and stomach as places where feelings and intuition take place. In the 20th century, we have laughed it off by having much focus on our conscious brain whilst the idioms lingered on in e.g. pop music. According to received wisdom, the brain is the only place where thoughts and feelings ought to take place.

In the 21st century, scientist have discovered we do have neurons round our hearts and stomachs, connected to our neural cortex.

There is plenty of other circumstantial evidence out there. The British biologist and author Rupert Sheldrake (accused as being a pseudoscientist) postulates that your mind is not confined to your skull and body. Rather it must tie into a larger magnetic interconnected, collective memory providing a certain level of telepathy with others through morphic resonance.

When we are close to someone, we can almost predict when they’re going to telephone us. We sense that someone is looking at us from behind, turn and gaze at them, and it might be best explained by receiving externalisation from others as microwaves. Interestingly, no one in academia wants to peer review Sheldrake’s experiments and findings. But the intelligence agencies of our geopolitical powers appear to buy into the idea, and so do I in part.  At least I hold it as a good hypothesis. Why else would we use terms like ‘being on wave length with someone?’.

I think we, involuntary, externalise thoughts and feelings in many ways other than thinking them out and uttering them by words. If you accept that premise, you might also extrapolate that we cannot keep what’s on the inside simply by keeping our mouths tightly shut. To use a trite phrase: “You cannot not communicate”, and this lady is glowing and overflowing with love; and she is on her way out to meet someone on a date.

You can view more paintings in the series ‘Chroma’ along this path.

Acquired in June 2018 by a private collector in Örebro, Sweden.