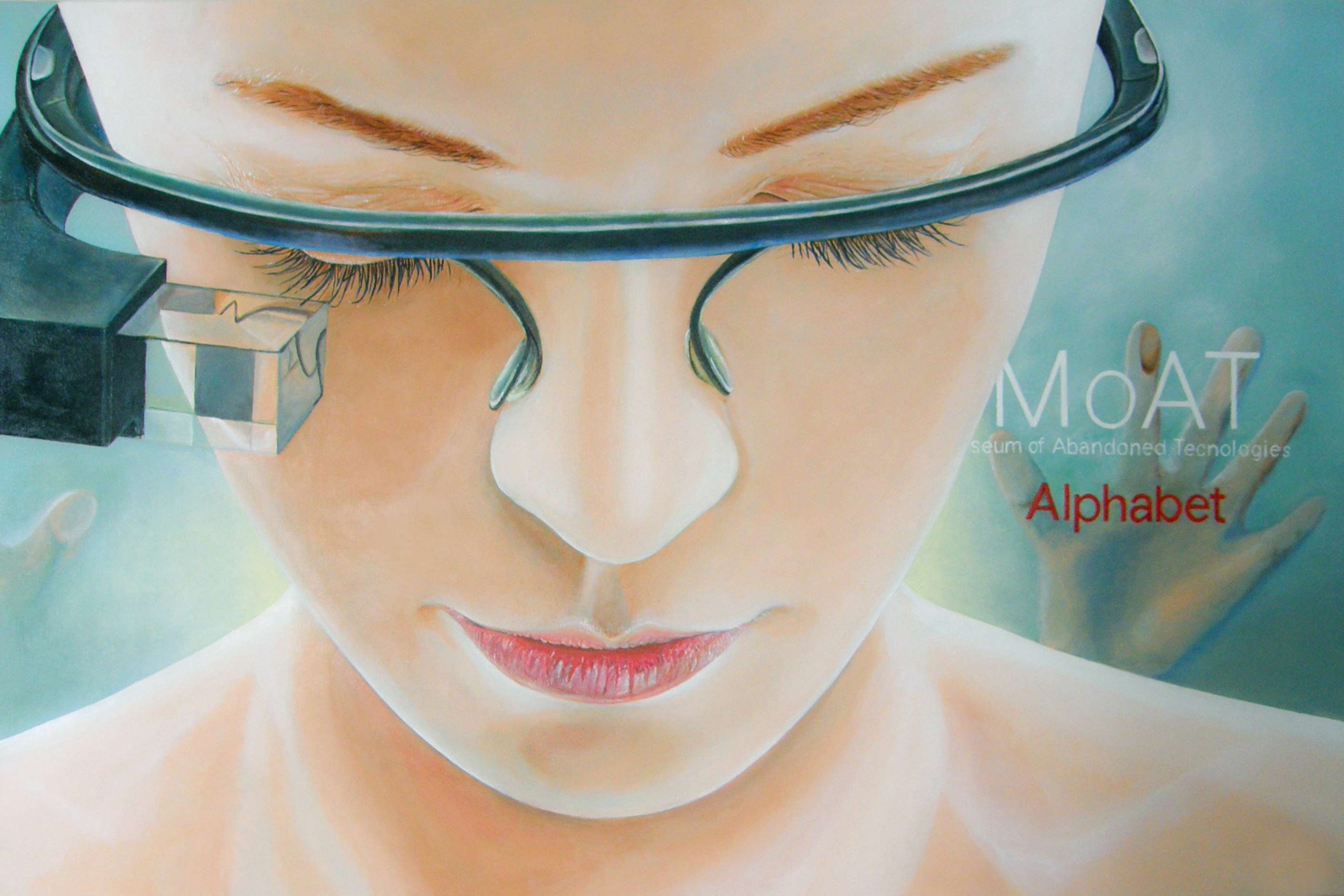 1C (MoAT) is art about AI or rather it contextualises the dynamics of the press, public fear and human irrationality surrounding it. Lots of people consider themselves separate from artificial intelligence. But short of having computers implanted in our bodies, we have merged with AI long ago. We just voluntarily carry it with us all the time in the shape and form of handheld devices, constantly drawing on a network of AI through mobile connection or WIFI.

What catches the public fear and imagination; and what goes completely under their radar fascinates me as an artist. So i took a bit of recent history and summed it up in this painting. The young woman is wearing Google Glass. There is frosted glass pane behind the woman with the logo type MoAT Museum of Abandonned Technology. Beneath that it reads Alphabet Inc. Alphabet is an American conglomerate created through a restructuring of Google on October 2, 2015, making it the parent company of Google and several subsidiaries.

In retrospect, the story is that Google worked under wraps on a revolutionary new wearable computer technology. Then the story somehow seeped out. If that is accurate, it led Google to way up the options. As it was in the final stages of its first-gen product development, it decided to force through a public product launch quicker than otherwise intended. Initially, that went well with an orchestrated effort in the form of PR and marketing events. At least they outshone the best Apple releases of the next iFantastics.

According to New York Times: “Tech reviewers who finally got their hands on Glass described it as “the worst product of all time,” aptly noting that it had abysmal battery life, and that it was “a product plagued by bugs.” It suggests again, that Google probably launched the product a fraction too early, and that tech reviewers are and incredibly fussy breed of people.

But perhaps worse still, was some unforeseen ethical issues that society had not had time to prepare itself for mentally.

At a basic level you would soon be able to meet a total stranger on the street, and have them paired up both with their identity and interests. It is not all that easy, but you can now do the exact same thing with a smartphone or a tablet today. Either way, the hit rate is not 100%. Although, I guess the point was that it would go unnoticed if you were using Glass. Other privacy concerns emerged. People afraid of being recorded during private moments at the urinal. It was also banned from bars, cinemas, casinos and other places that did not want customers surreptitiously recording. The irony is that Smartphones were not banned from those places, though the act of recording remained so.

September 2015 Google announced that it would close its Glass Explorer program (a programme for the chosen few beta testers). Journalists saw this as the death knell for Glass. They dramatically wrote that the project was abandoned. However, in reality Google simply took stock of the situation, and rolled it back under wraps. Glass was then overseen by Ivy Ross, who ran the smart-eyewear division, and Tony Fadell, a former product executive from Apple. Now in the 202os the more calm and collected approach appears to pay off.

“Early Glass efforts have broken ground and allowed us to learn what’s important to consumers and enterprises alike,” Mr. Fadell said in a statement. “I’m excited to be working with Ivy to provide direction and support as she leads the team and we work together to integrate those learnings into future products.”

You can find more art about AI in the series Augmented here.