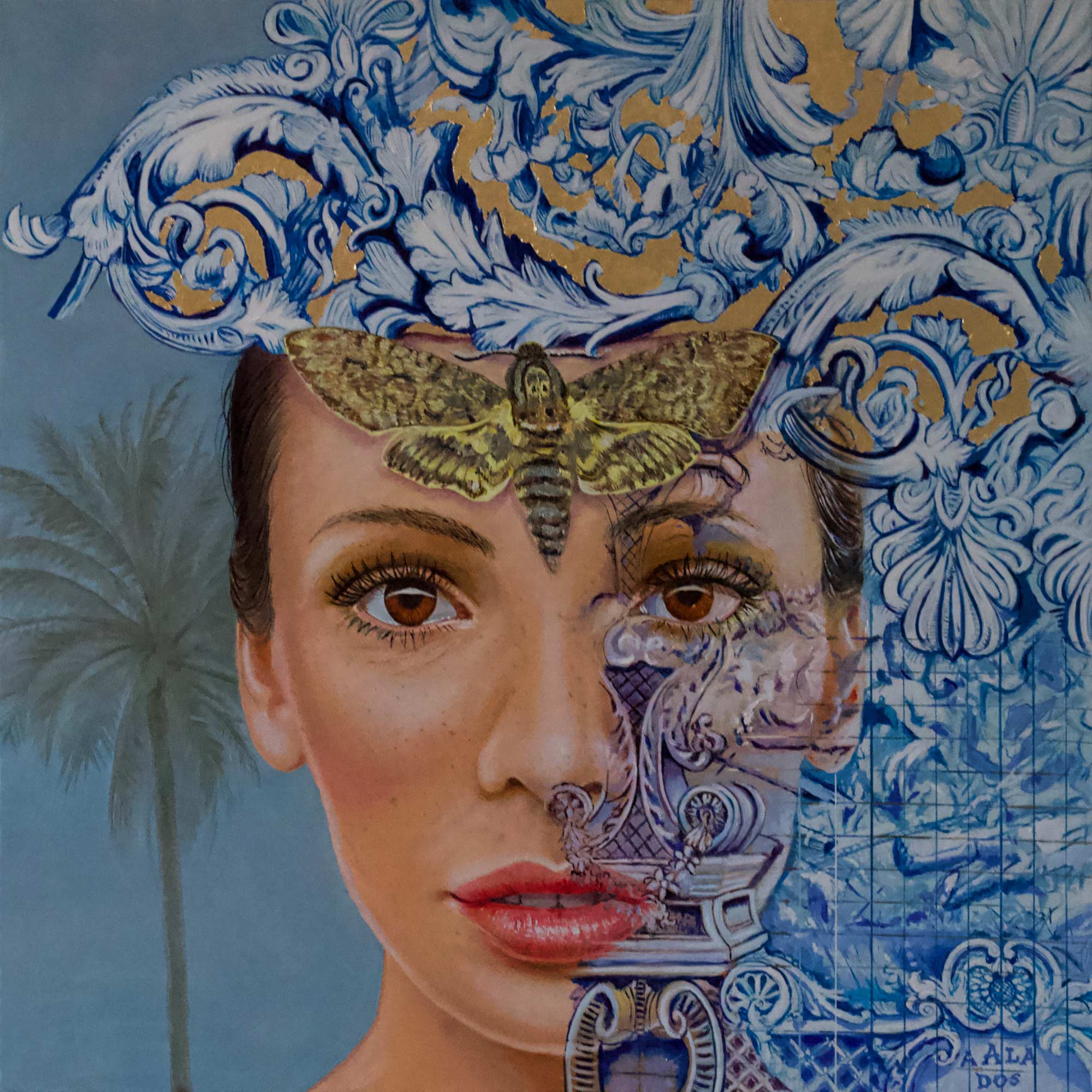 4j (Atégina) took a while to manifest itself and might best be explained as a vibe or feeling. Nothing more, nothing less.

Having visited Portugal a few times and having the pleasure of working with Daneportal Ltda in Cascais for a brief period, this has become a very personal painting. My first and lasting impression of Portugal is that it is as magical as it is spellbindingly beautiful — even if I have not seen all that much of it. You also sense its distinct flavour is marinated in much history. So I promised myself to capture that one day. So much for the Geo-targeting. It has to be said that you can connect with this work without having any Lusophone connection. After all, private art collections, churches and museums are full of paintings that are not from your backyard. Much of that art depicts narratives that geographically took place in antique Greece, Italy, Israel and Palestine.

As it happened, I looked for visual references that somehow summed up this very personally unique experience. I revisited some of the online sources that Daneportal Ltda used for Portugalnyt, in order to present a Danish portal about Portugal.

Looking for a suitable character with the right amount of ‘magic’, I one day came across mention of Atégina, a Lusitanian Goddess. Lusitania is roughly where Portugal is now. In the resultant painting, the deity looks gently and yet intensely at us. Dreamlike monochromatic ornamentation appear to her right and overlap her face in this painting. In Sintra you have this thick early morning fog, and with a single palm tree, it became my preferred background for this work. Now, according to the myth, the goddess has a goat. However, that has deliberately been left out on this occasion. Since this composition shows mainly her head and neck, it would be odd for a goat to appear at eye level. Besides, it was one of Marc Chagall’s specialities to make goats float midair whilst playing violin. But we have something else: a moth sitting on her forehead. Moths are symbols of rebirth, change, transformation, resurrection, and power of regeneration.

Atégina is the divine lady of the Underworld. As well as the Dawn Goddess. She is reborn every year, and is the goddess of great many things that could be summed up as ‘transformation and human destiny’. For instance, she influences rebirth, rejuvination and the return of the season Spring, as well as fertility, illness, and death. As one of Lusitania’s primary deities of their pantheon, she would invoke a curse on enemies and enact justice. As well as bless plans and dreams.

Talking of enacting justice on enemies, the Azulejo tiles to the right have been borrowed from a panel of the Battle of Aljubarrota (1385). It was painted in 1922 by Portuguese artist Jorge Colaço. That battle was a defining moment in Portuguese history where all the odds were stacked against the local army and population. The Kingdom of Portugal, however, won its supremacy and the Castilians lost.

At the time, the Portuguese talked much of divine intervention — be it pagan or Christian. King João expressed his gratitude by ordering the construction of the Catholic monastery of Santa Maria da Vitória na Batalha and the founding of the town of Batalha. Part of the popular imagination is also the tale of a woman called Brites de Almeida, the Padeira de Aljubarrota (the baker-woman of Aljubarrota), who was said to be very tall and very strong, and had six fingers on each hand. She singlehandedly killed eight Castilian soldiers who were hiding in her bakery in the town of Aljubarrota after the battle. The story, like so many, must be hearsay and exaggeration, but it has become a symbol of Portuguese independence. It also speaks volumes of a barbaric age, where it was permitted not to take any prisoners.

In the fine art series Caligo, you can find more paintings like this one.