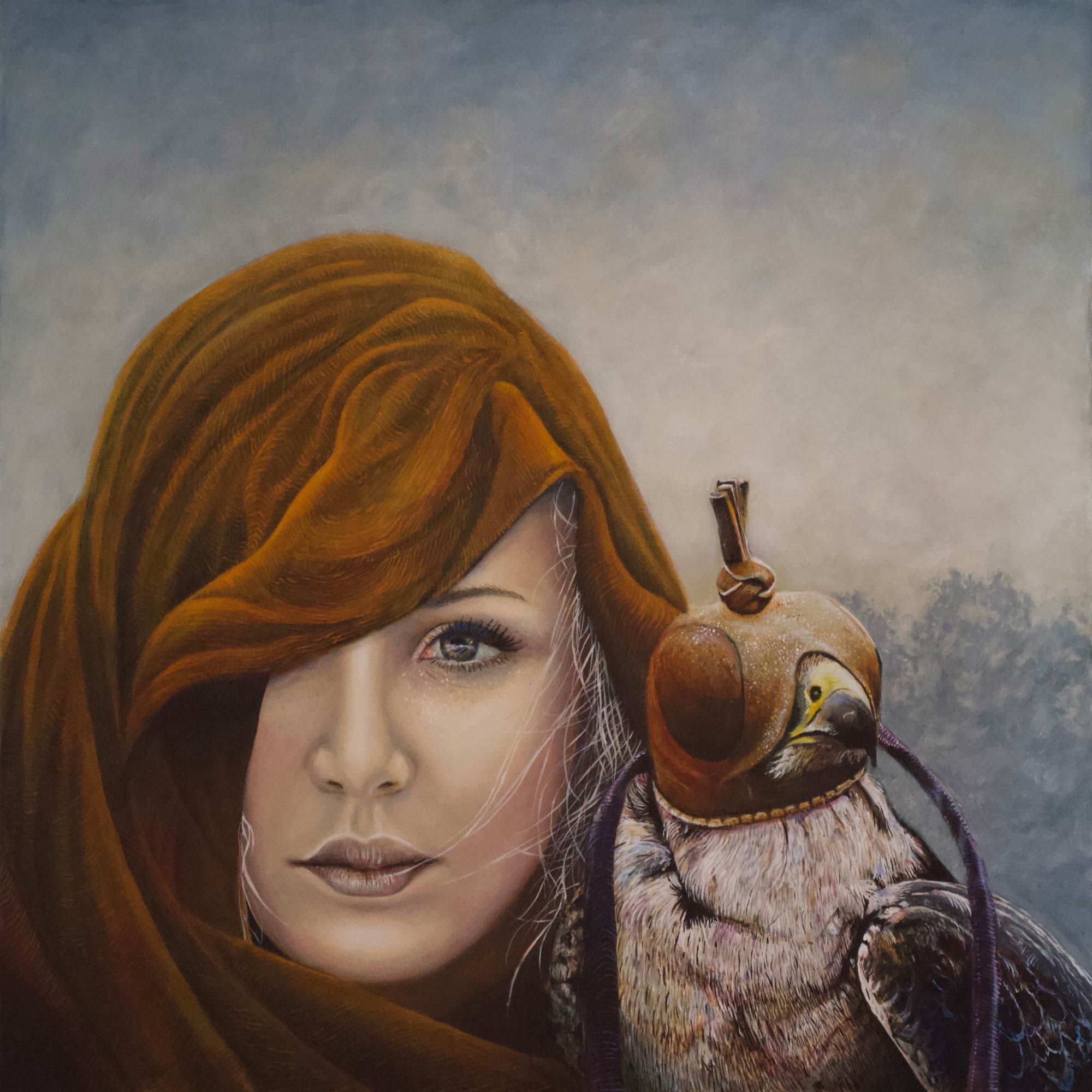 8F is a contemporary painting of Artemis. As the daughter of Zeus and Leto, and sister to Phoebus (Apollo), she is a Greek Goddess of hunting, the wild and the Moon. The Romans borrowed Artemis and called her Diana.

Depictions of her often include props and symbols such as bow and arrow, a quiver and hunting knives. Other portrayals of her include a hunting dog, the stag, and the moon.

Here, however, you have her as a hunting falconer with a falcon instead. You find her in a misty landscape with forest in the distance. She is wearing something practical here to add the everyday mod cons to contrast the scantly clad paintings and sculptures of her. While Greece clearly has 40+ centigrade at times, it rarely occurs early mornings, nights or in the winter.

Greek mythology is not only fantastic. It is also full of whimsical details that reveal what used to impress people in antiquity.

Artemis clearly had an ambivalent relationship to men, and that might well have something to do with her father being a huge womanizer on too much Viagra. As an adult Artemis had attracted many gods and men. However, only her hunting companion Orion really won her heart. Orion was accidentally killed either by Artemis herself or by Gaia. The accidental man slaughter remains a case unsolved.

While a toddler sitting on the knee of her father (Zeus), she asks him to grant her ten wishes; to:

• always remain a virgin [but why?]
• have many names to set her apart from her brother Phoebus (Apollo) [egotism?]
• have a bow and arrow made by the Cyclopes [spoiled brat]
• be the Phaesporia or Light Bringer [Okay]
• have a short, knee-length tunic so she could hunt [Fair enough]
• have 60 “daughters of Okeanos”, all nine years of age, to be her choir [Anything else, like moving all mountains two miles left?]
• have 20 Amnisides Nymphs as handmaidens to watch her hunting dogs and bow while she rested [A pattern is emerging here]
• rule all the mountains [okay]
• be assigned any city, and only to visit when called by birthing mothers [job to do]
• have the ability to help women in the pains of childbirth. [good on you]