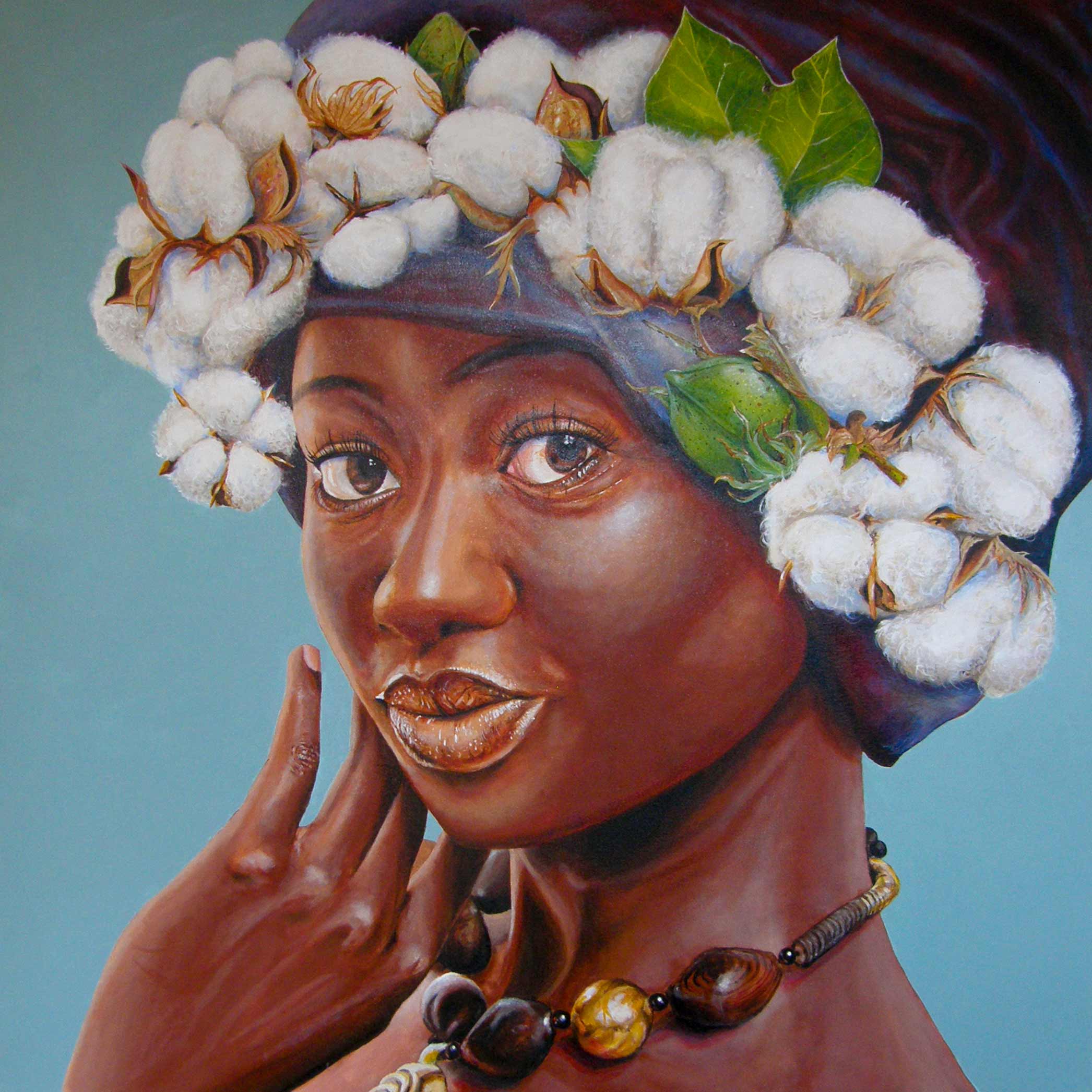 7B is a decent attempt to paint a classy and beautiful woman. Then there were those fluffy white bits on her head that I felt compelled to add, though it instantly meant trouble and suddenly called for justification. The image was inspired by reading about a chapter in history. The resulting painting of Cotton Girl is – at a loss for better words – a kind of ‘lest we forget’. It is about owning a story as a perpetrator, about the dignified stance as a victim; and the complex interdependency of the two. It is also about how that history became instrumental in shaping the system of global trading we have today.

The link between cotton and the African American experience has been central to the history of the USA. Cotton was the single most important determinant of American history in the 1800s. It prolonged slavery and slave-produced cotton caused the American Civil War, the bloodiest conflict which came close to destroying the young nation.

In the days when cotton production exploded to fulfil an enormous demand in the textile industry, it became the first truly global geo-political business and as a consequence a major reason for U.S. territorial- and economic expansion. It resulted in a type of systemic neo-colonialism that we still have today, where dependency abroad is secured through aid and loans.

Both before and after the Civil War, blacks were assigned the cotton fields while unfounded racial fear of a black migratory invasion caused white Northerners in the USA to contain blacks in the South.

Slavery is a grim thing altogether. Then what right does a white artist have to paint this with any credibility and authenticity? There is a term for posing that question. The notion of ‘cultural appropriation‘. It is championed by the Woke movement at the moment and they never see ‘appreciation’ anywhere. Never. So this painting is bound to offend someone, somewhere. It will be pointed out, that we cannot work on this theme because we are not descendants of the cotton slaves nor do we have direct personal experience of knowing what it is to be an underprivileged African American. You cannot win with those guys. But personally, I think it is wrong at so many levels. For one, it keeps us entrenched in apposing roles. What’s next? That the past sectarian violence in Northern Ireland can only be approached as a topic if you reside in Northern Ireland? The holocaust of the Third Reich can only be explained by the Jewish people, and the rest of us should remain passive or turn holocaust deniers? Consider this painting a sort of note taking in the spirit of George Santayana, who wrote: “Those who do not remember the past are condemned to repeat it.

I think in this case, we all own this. We are all a product of a trading system that ultimately was invented to keep meeting local demand, expand consumer markets abroad and the long-term securing; and sourcing raw materials as cheaply as possible.

Acquired in July 2018 by a private collector in Slagelse, Denmark.