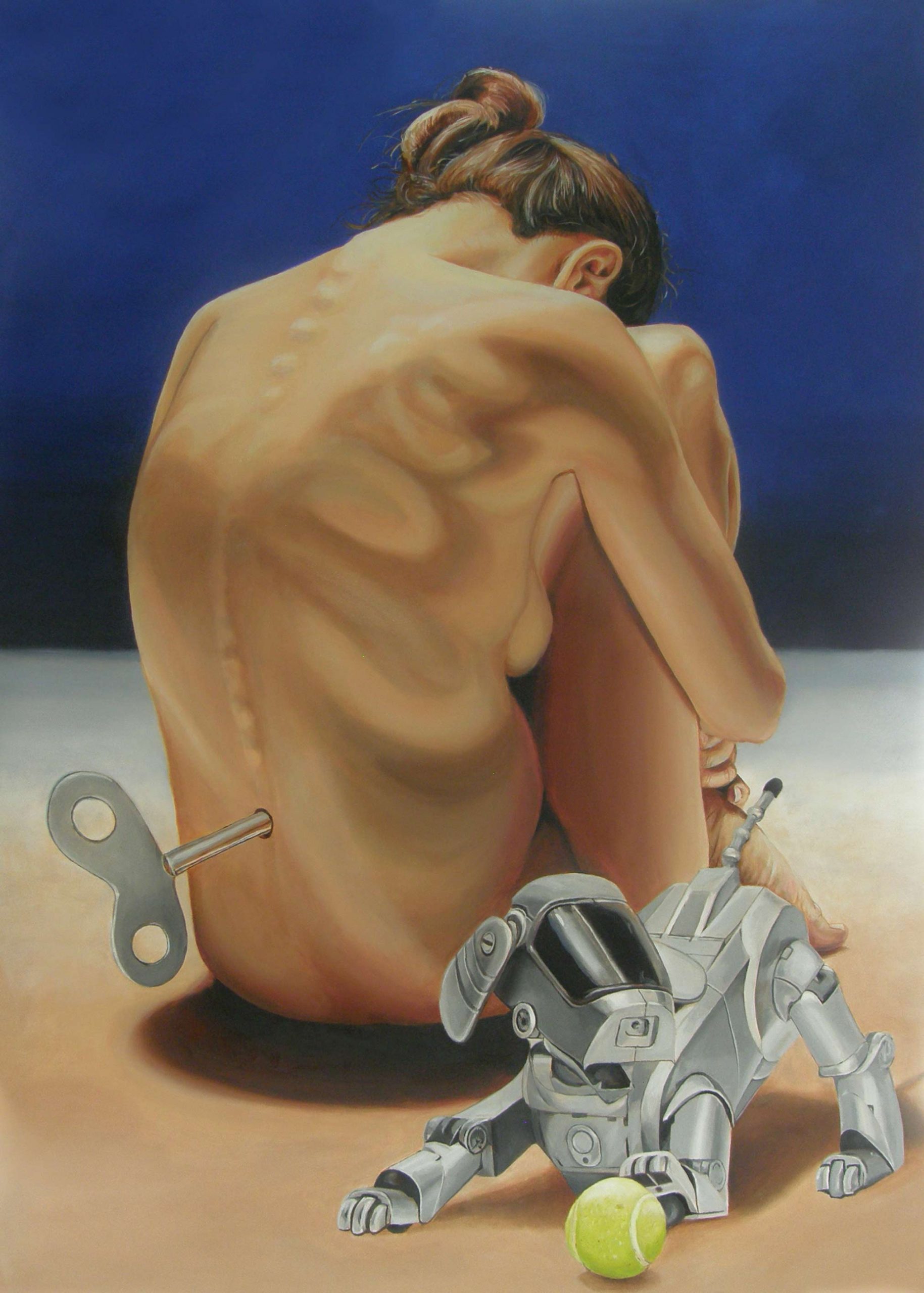 6c (Aiko & Aibo) is a painting about technology. It is inspired a little by listening to Youtube talks on the two topics of artificial intelligence and humanoid robotics. When you paint for many hours, there is plenty of time to listen while you work. It has to be said that the two topics are not necessarily combined, but it is obvious that robotics increasingly will be an extension of AI and machine learning via networked servers.

Aiko, the woman in this image, is mechanical life in an inactive pose. Her companion, the dog, is the first incarnation of Aibo, the robotic pet dog from Sony playing with a tennis ball. The setting is the floor in a an expansive desolate factory or storage facility. There has been a debate for a while as to whether we should take control over the direction that AI is taking towards singularity. Surprisingly, it has proponents you would not expect. The otherwise pro-technology entrepreneur Elon Musk has expressed his concern. I would personally sum it up this way. AI could make us pets in our own Zoo — or rather machine life could begin to see us as obsolete biomechanics that must be relegated to technical museums as inferior prototypes of their higher intelligence.

You can laugh as much as you want over this ‘fear mongering’. You can jokingly refer to the Victorian era novel Frankenstein by Mary Shelley, and say it never came to that. But then we can draw upon plenty of circumstantial evidence from ourselves. Humans treat other species on planet earth as inferior, simply because they cannot intelligently hack the world we inhabit. And what do we do? We have zoos for them, we imprison and milk cows, we use horses as fun transportation, we kill vermin (invasive animals not useful to us); and we test drugs and other chemicals on animals in laboratory.

So the hypothesis is, that if we do not interfere in the development of technology, we may well end up as sausage meat or zoo inhabitants. A common counter argument is that we can simply pull the plug on the machines. But if they have the ability to learn, they can also prevent that or let other machines in the network take over somewhere else.

Acquired in April 2021 by a private collector in Kolding, Denmark