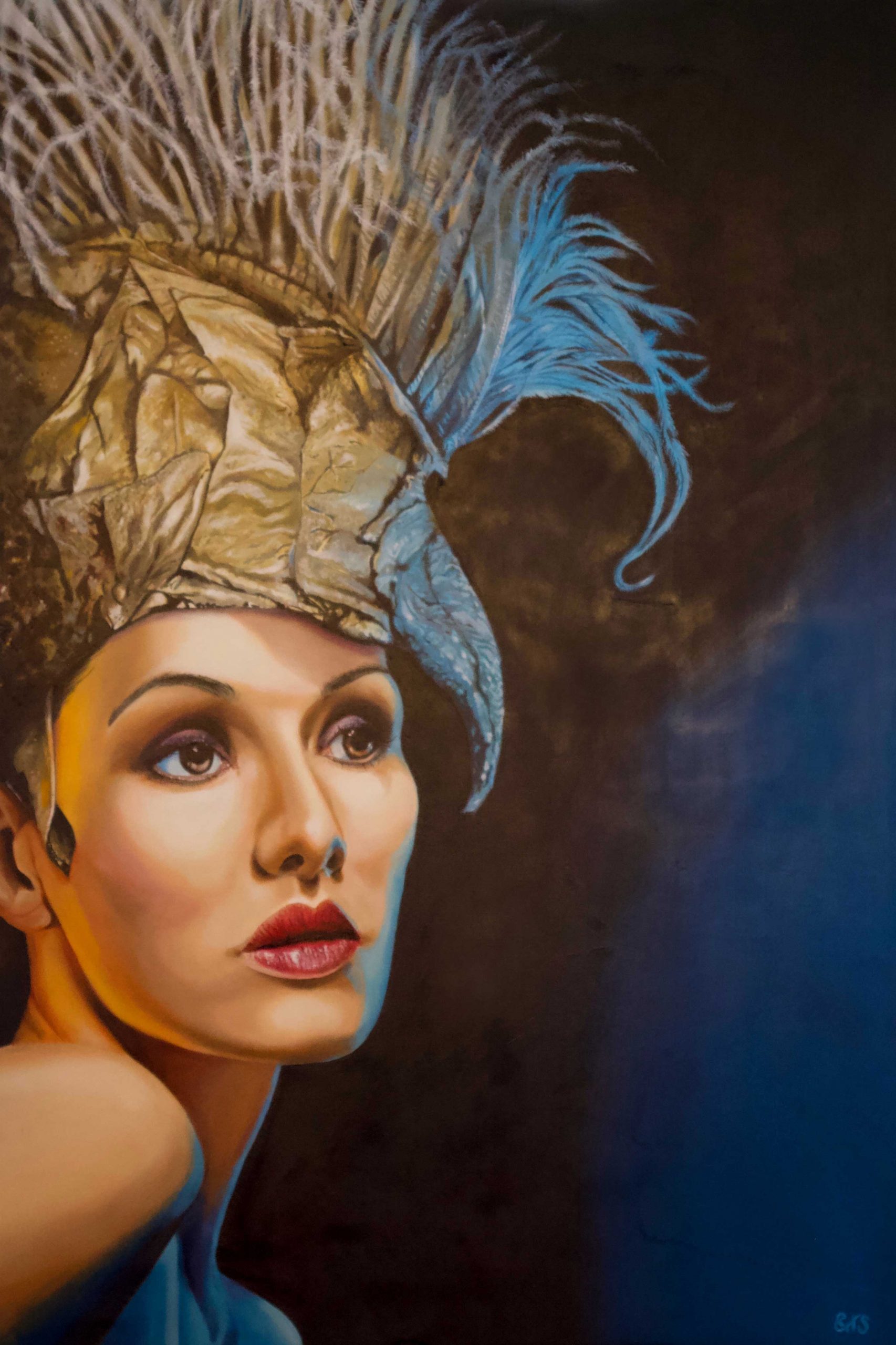 8g (Valkyrie) is a painting that captures a woman in a Valkyrie costume on a theatrically lit opera stage. At a loss for better words this image is a celebration of dramatic narrative.

In Norse mythology, a valkyrie is the “chooser of the slain”. She is one of several female mythological characters who chooses those who die in battle and who do not. The valkyries take their chosen to the afterlife hall of the slain, Valhalla, ruled over by the Viking god Odin. In addition Valkyries are lovers of heroes and other mortals, where they are sometimes described as the daughters of royalty, sometimes accompanied by ravens and sometimes connected to swans or horses.

Of course, this is potent stuff with dramatic appeal, and it has inspired great many artists. That includes Richard Wagner, who composed and arranged Die Walküre, as the second of the four music dramas that constitute Der Ring des Nibelungen. It was first performed as a single opera, at the National Theatre Munich on 26 June 1870. More about Richard later.

In the meantime, it is fascinating what you can get away with in opera — apart from murder. Think here: how far away this woman with thickly applied make up must be from the robust nordic types, who shuttle blood-drenched men from the battle field to their afterlife. Her outfit is not heavy and clunky viking armour and helmet. Rather, it is lightweight synthetically gilded nappa, African ostrich feathers; and the woman is otherwise scantly clad. It would clearly neither work in Ragnarok nor on Iceland, where even the rain seems to be at subzero temperatures.

As a cultural figure, Wagner sadly expressed antisemitic sentiments. Given that Adolph Hitler liked Wagner’s work and persuasions, it comes as no surprise that it has tainted public acceptance of Wagner’s creative body of work. This is a cognitive bias called ‘halo effect’, which is a fast instinctive way of judging character and safe guarding ourselves. Or put in another way, if someone lets you down in one respect, s(he) probably lets you down in another. But luckily people can sometimes slow down, think, and make exceptions. Then they realise that a person can be an utter fruit basket in one context; and a wonderful genius in another. By the same token, we deal with such paradoxes on a daily basis. Hitler was a vegetarian, and it has not stopped the rest of us from eating our vegetables. It goes some way to explain the following; The Ring of the Nibelung (which the Valkyrie is part of), is a monumental work that any serious opera company must attempt sooner or later. Hence it is performed on stage somewhere on this planet every year.

Here you can find more paintings from the series Mythos.

Sold to a private collector by Galleri Habsø A/S in 2020.